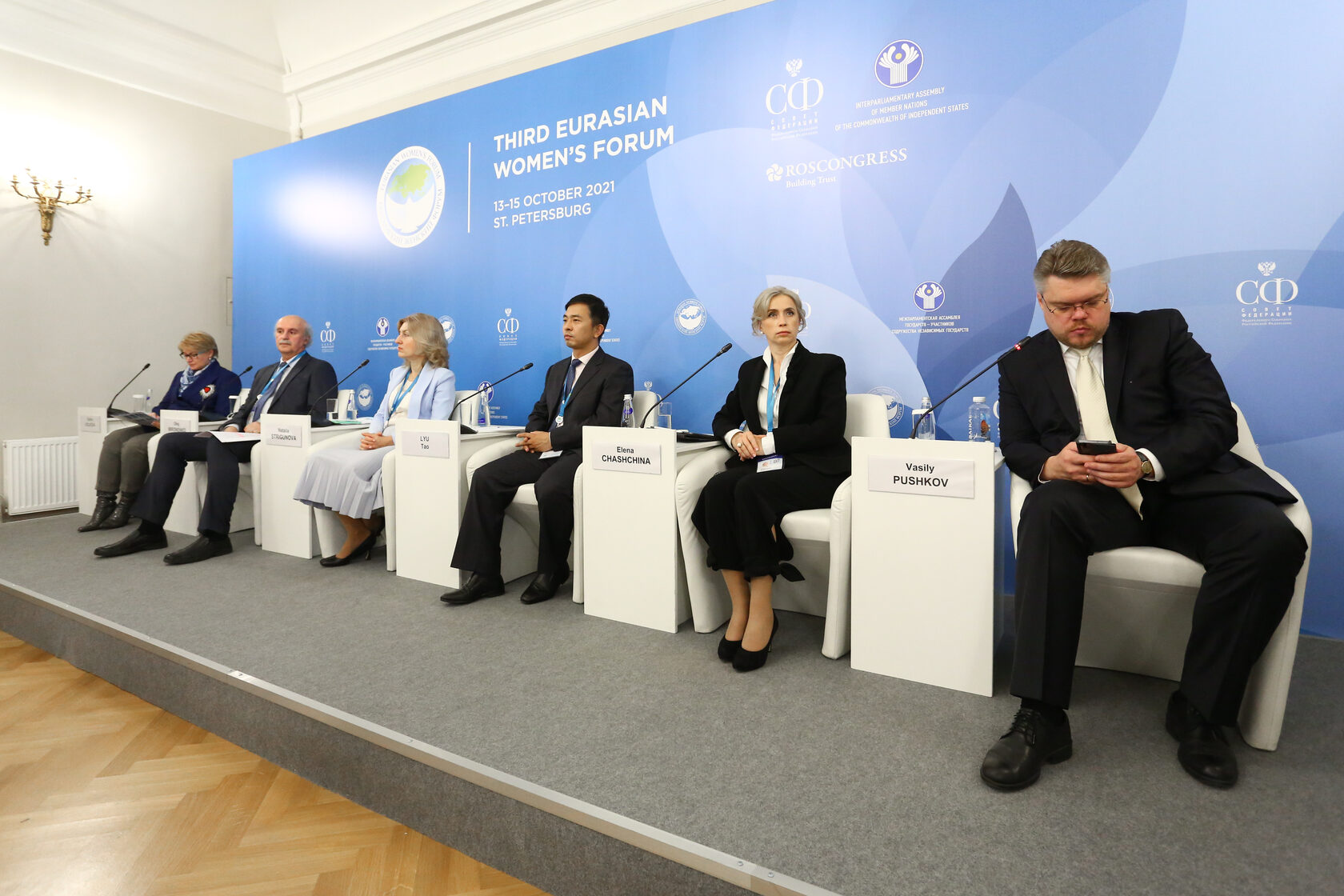 The presentation of the BRICS Women's Business Alliance took place within the framework of the III Eurasian Women's Forum on October, 14. The representatives of all five BRICS countries attended the event. Participants from Brazil, Russia, India, China and South Africa were present in St. Petersburg or joined the session from different cities of the "five" countries online. Mr. Vasily Pushkov, Director for International Cooperation of Sputnik News Agency and Radio moderated the discussion.

Mr. Pavel Knyazev, Ambassador-at-Large of the Russian Foreign Ministry, recorded his video message to the participants and organizers of the forum. In the video, he noted the urgency of the problems that the Alliance attends to.

Ms. Natalia Strigunova, Deputy Director of the Department of Multilateral Economic Cooperation and Special Projects of the Ministry of Economic Development of Russia, spoke about how women's entrepreneurship is developing in BRICS in the face of global challenges. She drew attention to the fact that the global gender gap has increased over the past year by 36 years, in fact by an entire generation. However, the speaker also saw a positive trend: women's business in the BRICS countries is quickly adapting to the conditions of the pandemic.

The Chairperson of the Russian Chapter, Ms. Anna Nesterova, told about the history of the creation of the women's business association and its current projects, focusing on the Russian project to develop the main platform for the Alliance. The speaker stressed that it is digital networking that will help to neutralize the impact of many barriers for women's business. The proposed platform will become the basis for establishing partnerships of women entrepreneurs in the BRICS countries and the main resource of the Alliance.

Dr. Sangita Reddy, the chairperson of the Indian Chapter and the chairperson pro-tempore of WBA, summed up the results of the year of India's chairmanship in the BRICS Women's Business Alliance. In 2021, the Alliance launched working groups on key areas of work: innovative development, inclusive economy, healthcare, creative industries, food and environmental safety. As a result of the work of these groups, members of the Alliance formulated the proposals, which were included in the annual report and presented to the heads of the five BRICS states.

Mr. Lyu Tao, Consul of the People's Republic of China in St. Petersburg, spoke for the Chinese side. The Consul stressed the importance of cooperation between the BRICS countries in promoting women's entrepreneurship and pointed to significant progress achieved in the development of women's business in China.
Previous news
28-09-2021
Greater 50 Conclave on Women Empowerment
23-09-2021
Joint Meeting of FLO and Russian Chapter of the BRICS WBA in Moscow
14-09-2021
The 13th BRICS Summit Was Held Virtually Under the Indian Chaimanship​
See all
© All Rights Reserved.